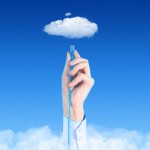 Technically speaking, “cloud computing” is simply software or data that’s housed in a location removed from users’ workstations. Most CRM software used by small businesses fits this description. But in general parlance, the term has become a more specific reference to web based applications that allow users to access software on PCs and/or mobile devices via the internet. The term “cloud” doesn’t refer to anything atmospheric but rather to the complex shapes drawn by people trying to visually describe the connections between networked servers and users

As sign makers continue to look for lucrative new markets, some traditional artisans are looking for the productivity gains of adopting digital technology. Much like today’s professional vehicle wrap installers, traditional window tint installers ply their trade with skills acquired through experience.

Standard or High Performance? The two most widely used kinds of window tint film are dyed charcoal films and metalized high-performance films. SignWarehouse offers both films in our EnduraTINT product line. EnduraTINT standard film is a dyed charcoal film designed to match the look of factory-tinted windows at an economical price. It comes with a […]

Why should window tint film be cut with a Vinyl Cutter? The main reason for an existing window tint shop to switch from manual cutting to software-based production is the increase in productivity and decrease in waste. It allows more work with less waste, thereby boosting revenue and profit. More Money, New Money