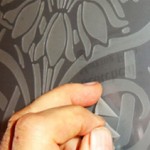 Reading bulletins from vendors is one of the ways we keep abreast of what’s going on in our industry and bring you the latest information from sign equipment and supplies manufacturers.  Occasionally we read a blog so insightful we can’t help but pass it on. Recently we ran across just such an article. R-Tape News & Views landed in my inbox with an article from vinyl application expert Jim Hingst about transferring and applying etched film window graphics. Jim’s blog is chock full of helpful hints. You owe it to yourself to read it in full. For those who are short on time and only want the Readers Digest Version, here are the highlights.
Parenthetical comments are ours.

When you are weeding a clear film on a clear liner, it is usually difficult to see what you are doing and very easy to make a mistake. (The same is true when weeding white vinyl on a white liner, which is why many manufacturers have adopted a blue release liner for white vinyl.) When weeding films such as the 3M Frosted Crystal (or ORACAL 8810 or 8510 Etched Vinyl) , working on a dark background can help greatly.

Fig. 1: Use this ‘old school’ trick to make it easier to mask clear film with paper tape.

Many people do not like to use a paper tape when applying clear films (such as frosted or etched translucent window vinyls or transparent or overlay films like ORACAL 8300 vinyl), because they can’t see the graphics. Here’s an old tip from an old timer. Use a Conté crayon or a carpenter’s pencil to do a rubbing. Voila! The graphic appears. See Fig 1.

Proper surface preparation will ensure good adhesion of the graphics. The right way to prep glass is a multi-step procedure. First, wash the windows with a liquid detergent and water. After washing, rinse the surface with clean water and let the windows dry. Next re-clean the glass with a mixture of water and isopropyl alcohol. Dry the surface using lint-free paper towels. ..Caution: don’t use such glass cleaners as Windex® that contain silicones, which can leave a residue that could inhibit adhesion. Some soaps, ammonia cleaners and solvents can also leave a residue that cause similar problems. After washing, carefully inspect the windows. To clean windows speckled with dried paint, use a razor blade and re-wipe the windows with alcohol.There are lots of other window graphics and tape application tips in Jim’s article. If you want the full story, along with excellent illustrations, surf on over to Hingst Sign Post, (Jim’s a punny guy) and read Transferring and Applying Frosted Window Graphics Films. It will surely make your next window graphics application a little easier and more enjoyable.