Every digital inkjet printer has an engine. Like the engine in your car, the printer’s engine is what drives its output. It’s the most critical element.

The heart of the print engine is the print head. Just as the engine in your car determines how far and how fast you can go, the head in your printer determines the speed and quality of your sign and graphics business.

The PrismJET VJ54 is a great vehicle for a fast-moving sign business partly because it has an outstanding engine. It uses an advanced piezo-electric print head with a patented innovation that leaves other printers in the dust.

There are other printers on the market. Some seem to be pretty modern. Then you lift the hood and find that they’re driven by old technology that can keep you out of the fast lane.  These differences are critical because the capabilities of a print head can fuel your business or cripple it. How does a piezo-electric print head work? How does print head technology affect your productivity?

First, let’s consider what the print head actually does. The print head is the critical part that controls the flow of ink and converts the ink in your cartridges to dots on the paper, vinyl, banner, or other media. It receives ink from the lines and jets it down to the media. The defining factor that determines quality is the amount of control with which the head expels the ink.

This control is measured in drop size. The smaller the drop size the more control a print head has. Smaller dot size gives better quality with finer details.

Thermal inkjet print heads do this by heating – essentially boiling – the ink. Heat pressurizes the ink and forces it through the nozzles.

Piezo-electric heads do this by sending an electric current across a wafer-thin, flexible crystal membrane (Fig 1). The current causes the membrane to flex in which pressurizes the ink in the chamber and jets it through the nozzles. Then it flexes out to draw more ink into the chamber.

One of the benefits of piezo print heads vs. thermal ink jet heads is that the electric currents used to flex the membrane can be controlled more precisely than the heat in a thermal inkjet head. This results in smaller nozzles, smaller ink droplets and higher print resolution. The head in the PrismJET VJ54 can print droplets ranging from 1.5 to 21 picoliters. One picoliter is one trillionth of a liter. An average raindrop is hundreds of thousands of picoliters in volume. In other words, the precise output from an advanced piezo-electric print head is a modern marvel.

In addition to the smaller droplet from the more precise head design, piezo print heads can jet droplets of varying sizes simultaneously. This function, known as variable micro-dot printing, allows the printer to use smaller dot sizes to fill in minute areas around larger drops. Variable micro-dot printing produces text with crisper edges and smoother transitions from light to dark areas in high-resolution prints.

Thermal inkjet printers produce larger drops and lower resolution. And because they lack the variable micro-dot capability of piezo-electric print heads, their output can be grainy in lighter areas. That is why many latex printers require you to use light magenta and light cyan in addition to cyan and magenta to handle gradients, especially in the flesh tone areas of prints.

Banding is the appearance of visible lines running perpendicular to the print head’s path across the media. The movement of the print head along the X axis (left and right) and the movement of the media along the Y axis (forward and backward) must be precisely coordinated so that ink is laid down evenly enough to convey the printed image with no visible gaps or overlapping. If the media advances more quickly than the print head, white gaps or light bands will appear in the image. If the media advances too slowly, dark bands will appear. Either of these distracts the viewer and degrades print quality.

The old solution to banding is to add multiple passes. Send the print head back and forth and back and forth enough times to completely cover the media. This of course increases the ink load which can retard drying time. It also reduces print speed, which inhibits the productivity and profitability of print service providers. Many choose speed over quality. 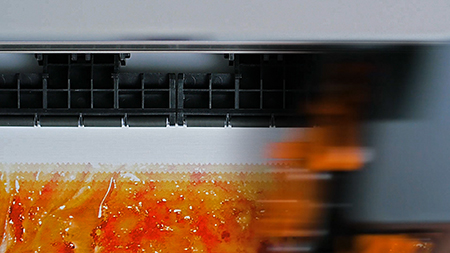 In addition to the already remarkable precision of piezo-electric print heads, the PrismJET VJ54 benefits from a patented discovery we call wave printing. Because the electric currents through the piezo crystals are so precisely controlled, MUTOH patented an innovation where the nozzles are fired and ink is jetted in a wave pattern. This means that ink is laid down on the media in overlapping wave patterns as the head travels across the media (Fig 2).

The overlapping wave pattern virtually eliminates banding and produces high quality prints at high speeds. Some printer manufacturers who use old thermal inkjet heads make similar claims, but give no details. So let’s quantify that. The accepted industry standard for good print quality is 720 x 720 dpi. This is the resolution most customers find pleasing. You can use lower resolutions for images viewed at a distance, but these prints generally look disappointing when viewed at arm’s length or closer. So 720 x 720 dpi is commonly called ‘standard’ print resolution.

Typical print speed for a printer running at 720 x 720 dpi without the benefit of wave print firmware is about 69 square feet/hour. The print speed of the PrismJET VJ54 at this same resolution is just over 150 square feet /hour. From a single print head. Yes, that’s twice as fast. That’s the genius of wave printing.

Latex Lags Behind in Resolution

Sure, you can make it faster by reducing the number of passes, but this will degrade image quality to the point where your customer may not accept it. You might say buying a latex printer is like buying a new car with an old engine. Be ready to spend a lot of time fiddling with the carburetor.

What kind of vehicle do you want driving the growth of your sign business?  The PrismJET VJ54…

The result is exceptional photo-realistic image quality, crisp text and smooth gradations. And its  patented wave print firmware eliminates banding so that you don’t have to sacrifice quality for productivity.

If you want your business to run smoothly, give it the best engine technology. A PrismJET VJ54 is the best vehicle for your sign and graphics business to drive sales and reach your goals.