There are countless applications for sign industry equipment and processes that have nothing to do with signs and banners. I’ve already written about decorating drinkware. This time I’d like to focus on a digital graphics application you probably see almost every day, but don’t recognize as vinyl. I’m talking about signs and props used in theater, film, and television. Traditionally theater sets are painted during set construction. While this is still a thriving art form, there are more and more instances of painted sets and props being enhanced by digitally printed elements like posters, banners, backdrops, and masks. Yes, masks.

I’ve seen this firsthand because I happen to be married to a thespian. My wife is an actress, and she’s fallen in love with community theater. She is currently serving as the property or “prop” master for the Sherman Community Players. The SCP’s artistic director likes to push the envelope of what can be done on stage, so every show presents challenges and opportunities to find – or make- just the right props to create a believable environment for the actors and the audience.
As a policy, SignWarehouse does not sell finished signs because we don’t want to compete with you, our valued customers. But we do support a few charitable and non-profit groups in the community, including the local theater. So naturally, my ‘honey-dos’ include creating custom digitally decorated props. Most of these are printed. So far we’ve used our PrismJET family of printers to create a variety of banners, props, and backdrops.

• Signs and Posters: The most obvious application for digital props in the entertainment industry is faux signage. Most of the storefront and window signs and used in any movie or TV show are created by the production company’s art department. For local theater, there is no “art department” so the crew and volunteers in the community supply stuff as needed. So far, we’ve printed posters for recent SCP productions of The Drowsy Chaperone, Boeing Boeing, and the current production of Honky Tonk Angels. In film and television, these details add credibility to the scenes. In theater, they can also be used to provide the audience with a richer visual experience. Most of these are printed on standard papers like Sihl 3686 glossy photo paper. 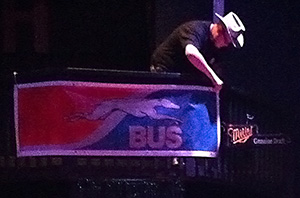 Fig 1: Setting up for Act II of Honky Tonky Angels requires hanging a banner printed on a PrismJET VJ48 Plus

• Backdrops and breakaways: For last season’s production of Frankenstein, the director wanted the monster to burst through a door terrorizing the heroine. We accomplished this with a life size backdrop printed on Sihl 3686. A new print was mounted on a frame for each performance. Because it’s an 8 mil, 52 lb paper, the 3686 offered the right balance of light weight which helped the crew position it quickly and quietly during scene changes, and enough stiffness to create a loud pop when “the Creature” burst through it. For the recent production of Boeing Boeing , we supplied a printed skyline backdrop that helped transport the audience from the historic Finley Theater to a Parisian bachelor pad. Since this was part of a permanent fixture, we opted for Sihl 3608 semi-rigid film with good weight. The weight and semi-rigid construction made it easy to mount the backdrop behind the shutters that had been built for the back of the set.
The current musical production of Honky Tonk Angels uses a digitally printed banner and poster. A Greyhound logo printed on MUTOH Ready2Print banner media and a faux Memphis travel poster created are added to the set to help change the scene from the inside of a double-wide trailer in Act I to a Memphis Greyhound bus station in Act II (Fig 1).

• Wrapping Books and Boxes: Of all the digitally printed props and backdrops I’ve done so far, the most fun have been the fake book and album covers. We used a fake TSA book cover for Boeing Boeing to create an prop that was integral to the central plot. Because we were covering a book that might need to be reused in a later production, I opted for PrismJET 234 WallTex, an adhesive -backed polyester fabric. The fabric gave the book a texture not unlike an encyclopedia. The 7mil thickness of the film made it easy to wrap the book without worrying about stretching the film, and the low tack adhesive provided the option of clean removability without damaging the original book cover. These features have made WallTex a good choice for covering several other items, including dozens of plaid-covered props for the 2013 productions of Forever Plaid and Plaid Tidings.

Fig 2: Pre-masking the print makes it easier to apply the PrismJET 203 to the album without scuffing or stretching it.

• Faux Album Covers: When you’re doing musical theater, naturally one of the things people expect to see are old record albums. For Forever Plaid, and Plaid Tidings, we created a series of spoof albums recorded by the Plaids including The Good, The Plaid and the Ugly and Rhapsody in Plaid. These were all covered in PrismJET 234 WallTex or 203 glossy vinyl. For Honky Tonk Angels, we created three fake albums featuring the actresses on the cover. These are displayed in the lobby to help prepare the audience to meet the stars of the show and buy into the story of three ambitious country girls who end up in Music City following their dreams. These were all covered in PrismJET 203 glossy vinyl printed by our PrismJET VJ24 and PrismJET DTx. To make the albums more believable, I covered them front and back. To make the 3 mil vinyl easy to apply without risking stretching the film or scratching the prints, I pre-masked them with Main PerfectTear Plus GXP750 medium tack tape. I used the tried-and-true hinge method to apply the vinyl without application fluid (Fig 2).

• In addition to the props contributed by SignWarehouse, one of the local businesses, PermaTron Elevator, has helped the SCP with custom props and prints. PermaTron uses a MUTOH ValueJet 1614 to put the finishing touches on their products. Through the generosity and creativity of Mike and Lucinda Hauber, PermaTron has supplied a plethora of props including custom ‘skins’ for a TV camera used in the 2012 production of The Sunshine Boys laboratory labels for Frankenstein, cafe signs used in The Three Musketeers, airplane windows for The Drowsy Chaperone,” Walk of Fame” stars, posters, banners, photo backdrops, and much more.

Digital prop production isn’t just for forward thinking community theater. Lots of film and TV production studios use our equipment and supplies. You can’t do justice to Hollywood without doing a little name-dropping. We have supplied equipment and materials for Orange County Choppers, Pixar, Disney Entertainment Arts, Universal Studios Florida, NBC Universal, among others. Most of them use printers and /or plotters to create simple two dimensional graphics, as noted above. One of the more interesting new applications for sign equipment involves printing the infamous Edgar Allen Poe mask for the new Fox TV series, The Following. Dino Rentos Studios uses a MUTOH ValueJet 1617H hybrid printer to print the image of Poe’s face. Then the print is vacuum formed to create the three dimensional mask used on the show. You can see more about the process in their YouTube video.

So don’t limit yourself to signs and banners. If you’re looking for new markets and customers, consider contacting your local theater group. An equity theater company may become a new customer. If you live in a major market like New York or Los Angeles, contact your local production studios and see if they need some custom props or backdrops. Depending on the demands of the production company, you may find a ready customer for your sign making skills, or even discover a whole new market niche for your digital graphics business. Even if you don’t find a new profit center, you may find a rewarding new way to apply your sign making skills and help support the performing arts in your community.