“So I said to myself, if some day I could become a good sign painter, that would be terrific!”

by Chris | Design and Layout 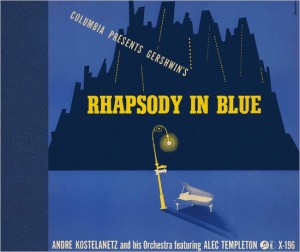 Alex Steinweiss, an art director and graphic designer who brought custom artwork to record album covers and invented the first packaging for long-playing records, died on Sunday in Sarasota, Fla. He was 94.

“The way records were sold was ridiculous,” Mr. Steinweiss said in a 1990 interview. “The covers were brown, tan or green paper. They were not attractive, and lacked sales appeal.” Despite concern about the added costs, he was given the approval to come up with original cover designs.

For a Bartok piano concerto, he rejected a portrait of Bartok, using instead the hammers, keys and strings of a piano placed against a stylized backdrop.

For a recording of Gershwin’s “Rhapsody in Blue,” he used an illustration of a piano on a dark blue field illuminated only by an abstract street lamp, with a stylized silhouetted skyline in the background.

Mr. Steinweiss said he was destined to be a commercial artist. In high school he marveled at his classmates who “could take a brush, dip it in some paint and make letters,” he recalled. “So I said to myself, if some day I could become a good sign painter, that would be terrific!”

Read the full article in the NYT here.