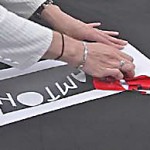 One of the challenges in using T-shirt transfer film (aka, t shirt vinyl) for garment decoration is learning to adapt to different films. Not all heat transfer films are the same.  Many garment decorators want to use the same plotter settings and processes for all their custom Tees. That’s a little like using the same recipe whether you’re cooking chili or lasagna.

Our new EnduraTex Flex T Shirt Vinyl is a film of a different flavor. It serves up very soft  and durable graphic Tees and custom apparel; but you may have to change your recipe just a little to get the flavor just right. Like any good recipe, the secret is in the ingredients.

One of the ingredients that differentiates  EnduraTEX Flex from our other offerings  is the liner. It works a little differently than Easy Weed or Easy Weeding Sport.  So is the new EnduraTex Flex better or worse? Like, food, it’s partly a matter of preference.

Here’s how to choose what’s right for you.

Some of our more popular heat transfer films are Siser Easy Weed and Chemica Easy Weeding Sport. Because these products are much thicker, they have a self-adhesive carrier with a fairly high tack level. This is because they require more force to cut, and the high tack liner hold the product down while the blade is cutting it.

The high tack means that, in practice, they’re not actually “easy to weed”.  It requires more pull strength to weed your cut graphics because the liner is holding the film quite firmly. It’s also tacky to the touch.  They do have other wonderful features, but this really isn’t one of them.  So why do people use a film that requires more muscle?

A much thinner film that looks great on the garment is EnduraTEX FLEX and EnduraTEX Print. This film is so thin that it doesn’t need any adhesive to hold the film down while cutting. And here are it’s other advantages…

So there are advantages and disadvantages, pros and cons, to either type of film.  Choose the best film for your needs, or use different kinds for different kinds of garments. SignWarehouse stocks an enormous variety of heat transfer films to suit all kinds of tastes.   But they don’t all work the same way.  Some may require you to adjust your recipe a little.