Under Pressure: The Secret Ingredient to Satisfactory Thermal Transfer Applications 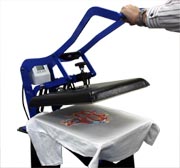 Pressure is as important as heat

As you probably know by now, garment decoration represents a growing and profitable business opportunity for anyone with a Vinyl Cutter and Sign Software. Many of you have discovered this enjoyable profit center. As people make the transition from vinyl graphics to thermal transfer applications, it seems that the element that causes the most problems is pressure.

For those who are unfamiliar, we’re talking about applying spot color graphics to fabric using an adhesive backed film. Think of it as vinyl for your t-shirt. It works much the same way, except that, when you send your graphic to the plotter, you flip or mirror the image. Then you weed it, lay it on a garment, and seal it with a heat press to bond the graphic appliqué to the garment. There are dozens of different varieties of thermal transfer film and the dwell time and temperature requirements vary from one to the other.

But time and temperature are not the only variables. The pressure requirement varies too and using too little pressure can be just as bad as using too little heat. Your graphic will come off either immediately or ultimately. So how to you make sure you get it right?

Why is this important? What happens if you apply too little or too much pressure?

Thermal film adhesives are activated by both heat and pressure. Too little of either means the film won’t stick. Usually, when a film doesn’t stick, the solution is to increase the heat. Some film manufacturers have gone so far as to suggest that the indicated output on the heat press is incorrect and a digital thermometer is needed to be really sure you’re getting the required application temperature.

But heat is only part of the equation. Insufficient temperature or insufficient pressure can result in an unsatisfactory bond between the film and the fabric. If you don’t think so, try reducing the pressure on your press to very light and doing a transfer. You’ll probably find that, when you peel the liner, the film comes off with it. With insufficient pressure, the adhesive doesn’t bond completely with the fibers of the garment and the stress of removing the liner overwhelms it. (Of course, this has never happened to me).

The initial peel isn’t the only potentially delaminating force on your appliqué. The heat, water, and turbulence of laundering can also cause your appliqué to float away if it’s not properly sealed. So it’s possible to have enough pressure for the initial transfer to hold, but not enough for it to be washfast. Make sure you use enough pressure. A quick and easy way to add some insurance is to dial it up a few notches beyond the recommended limit. Too much pressure will not hurt most films. More on that later.

A quick and easy way to add anti-lift insurance is to repress the transfer after the liner has been removed. Peel the liner, reduce the time setting to about five seconds and press it again for good measure.  This will help the film recover from whatever weakening effect the pull of the liner may have had on the fresh bond between film and fabric.

Remember that note about too much pressure? With most heat presses, the only downside to using too much pressure is the added force necessary to close the press. If you’re a petite person, setting the pressure too high may mean you can’t lock the press down without assistance or personal injury.

There are some heat presses that require extra consideration when setting the force. Do you recall the old adage “what goes up must come down”? With the Digital Knight auto-release feature, the opposite is true. The harder it goes down, the faster it comes up. The amount of pressure used amplifies the speed and force with which the platen pops up.  I have seen a DK20-AR launch with enough force to suck the bottom platen out of its brackets. It can be fixed with a rubber mallet, but it takes a few minutes.  So if you’re using an auto release press, don’t use much more pressure than you need.

The pressure is shown by the segmented bar at the bottom

Speaking of the ups and downs of hardware, that brings us to the central issue. One of the reasons most people miss the mark with pressure is because most heat presses have rudimentary pressure controls. It can be hard to know whether you’re using light, medium, or firm just by looking at the platen. The Geo Knight company has taken steps to address this problem by adding a handy new feature to their Digital Knight product line. The new DK series heat presses have a bar graph displaying pressure settings from 0 to 9. It doesn’t provide a numerical display in pounds, but it’s still a useful gauge comparable to the force reading on the control panel of a Graphtec vinyl cutter.  How does it work?

You still adjust the pressure manually using the control knob. When you close and lock the press, the gauge displays the amount of pressure applied on the digital readout, telling you how much force you’re actually applying to the platen.

If you’re using a film that requires only light pressure, set the DK press in the 0 – 3 range.  For medium pressure, set your DK in the 4 – 6 range.  For firm pressure, crank your Digital Knight up to the 7 – 9 range for satisfactory adhesion. This will of course require more elbow grease to lower and lock the press, but the extra effort will produce better thermal transfers, and more satisfied customers.

If you have an older DK model, take heart. You don’t have to buy a whole new heat press to get the benefit of the new pressure gauge (far be it from me to discourage anyone from buying a new heat press).  A two piece Digital Knight pressure gauge kit can be ordered from Geo Knight or SignWarehouse. The kit consists of a new processor board and the pressure sensor kit. Digital Knight and Digital Combo presses use different pressure sensors, so make sure you order the right pair. You can install it yourself and the total cost is only $90 plus shipping. You can pay for it with the next five shirts that you don’t have to take back because the graphics peeled off in the wash.