Why Use Cast Vinyl For Vehicle Graphics 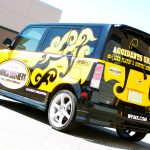 Vehicle graphics have been a popular use of vinyl for years. For a time, the most popular and widely recommended vinyl for vehicle graphics was Oracal 651. As a calendered vinyl, it had its limitations including conformability and durability, but it outperformed the competition of its time. Even today, many pros still prefer Oracal 651.

The Problem With Calendered Vinyl

The Advantages of Cast Vinyl

There are many advantages of using a cast vinyl over a calendered vinyl that will keep your work looking as good as the day it was applied for years to come, and it will leave you and your customers feeling more satisfied overall.

If you’d like to learn more about the differences between cast vinyl and calendered vinyl, you can check out this video from ORAFOL’s This VS That series.

In the competition of vehicle graphics, cast vinyl comes out on top. To get beautiful vehicle graphics that won’t fade or shrink, cast vinyl is the way to go. Cast vinyls are proven to last years longer than calendered vinyls in harsh outdoor environments without fading, shrinking, or peeling, and they can conform to all of the curves of a vehicle unlike calendered vinyl.